What’s in a name, and what’s this site all about? Part One 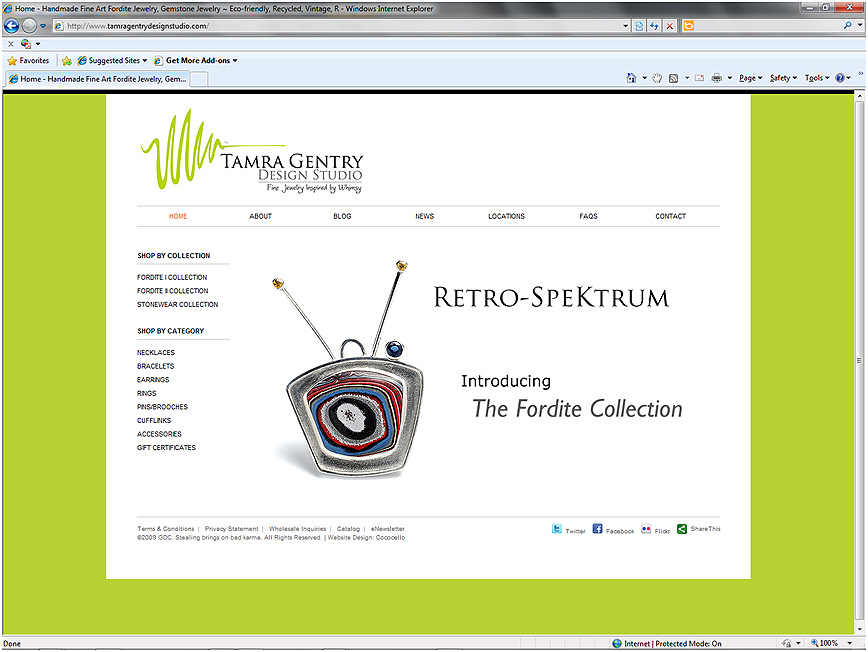 [Image: This was my original, post-Etsy website for Tamra Gentry Design Studio circa 2009. (Peep the Internet Explorer browser!) It was designed by the lovely Cococello, and it featured both my Fordite collection and my favorite color at the time–lime green. I really loved this website.]

In 2015, long after I’d retired my old business name Tamra Gentry Design Studio, a Google search revealed that someone else had purchased my old domain name the same year—just a few short months after I let it expire. I’d chosen to let it go because, as many businesses are wont to do, I’d gone through a very productive period of growth, change, and evolution. I was on to the next thing. I didn’t need the domain anymore, so I didn’t think twice about letting it expire.

Well, skid and halt. To my surprise, not only had a cybersquatter purchased the expired domain name, they’d set up an entire website spoofing my old business and my work with Fordite. This individual even tried to mimic my writing style.

I sold my work, but it wasn’t a gangbusters operation, so the notion of “monetizing” search results off of my business name didn’t make sense. For whatever reason, this person’s actions implied a certain degree of maliciousness. [Who has the time or mental space to do this? —Aren’t there more more pressing things happening in the world to focus one’s attention on (oh, like, say, climate change, hunger, human rights, etc.) rather than sitting around expending energy (and apparently money year after year since 2015 on domain renewals) trying to mimic me and hurt my business?]

Because there’s some disinformation being perpetrated using my old domain name, Tamra Gentry Design Studio [dot COM], let’s stop for a minute and clear up some really crazy stuff:

You get the point by now. If it looks and sounds shady or crazy, it’s a bloody duck. The spoofed site meets those criteria.

As weird as this situation was and still is, it was the catalyst for my current jewelry work using textiles. My studies of the larger body of culturally-significant Japanese and South American micro-textiles also came as a result of all of this.

This post is continued in What’s In a Name Part Two. [End Part One.]

Go to What’s In a Name, and What’s This Site All About: Part Two

This website uses cookies to improve your experience. We'll assume you're ok with this, but you can opt-out if you wish. Read More